We have the locker rooms ready, just need to get the Fleur-de-Lis Signs stickers and rules ready so we can open the locker rooms on Monday, 2021-01-11. You will need to sign an agreement to gain access. Sorry for the inconvenience, but we all have to follow the rules. The showers will remain closed for now, but if everyone cooperates we can probably get them reopened soon as well.

We are working on reopening on Sundays, so that should be possible starting in February. You will receive information about this in time.

We have updated the website and added a “download section”. There are forms, links and QR codes for the member app. The app makes it very easy for you to schedule and book your courses and classes. Click here for Downloads.

Roger Dort was born and raised in Guysborough, but moved west after high school. In 2001 Roger moved to Victoria and began training Aikido and teaching martial arts based on his background in Tae Kwon Do and Jujitsu. In 2003, Roger found a Shorin Ryu karate school (Warrior Martial Arts) that was happy to teach him and showed him that karate could allow him to harmonize all the pieces of the martial arts puzzle, rather than viewing them all as separate styles. Within a few months Roger was hooked and he has been doing Shorin Ryu Karate ever since!

At the height of his teaching career, Roger was teaching 15 classes a week to students of all ages and backgrounds. In 2013 he started his own non-profit school (@victoriashorinkankarate on FB) and in addition to teaching regular classes to his small group of adults, he has taught self-defense seminars for women, a karate seminar for a group of judo black belts, and bunkai (hidden meaning) seminars for various martial artists. He has trained throughout Canada, the continental United States, Hawaii and Okinawa, Japan.

This is intended to be a fun, interactive class that will provide some cardio training as well as cover the basics of Shorin Ryu Karate. The karate style of the royal family of Okinawa and the connection between Kung Fu and modern martial arts.

For early birds, we have activated online registration in our app, which you can download under “Downloads“.

Meet Shaina Kelly, born and raised in Victoria, BC! She is a trained Hip Hop, Contemporary and Jazz Instructor, with over 15 years of teaching experience in established dance studios. She has taken hundreds of professional dance classes across Canada and trained with some of the most sought after choreographers and teachers in the industry. One of her coolest experiences in dance was being a member of the hip hop crew that performed at the opening and closing ceremonies of the 2010 Vancouver Olympics.

She is excited to offer beginner classes in Dance Fusion for adults – no previous experience required! This class will give you a taste of various dance styles including Hip Hop, Contemporary and Jazz. Classes include stretching and strength exercises, movement and choreography.

It’s never too late to try a dance class! The purpose of these classes is to socialize, learn to move, listen to fun music, and bring a little more joy into our daily lives.

Don’t be shy, come out and shake your groove thang!

Limited availability! We will be offering another special that same week on Wednesday afternoons. To give everyone a chance, double bookings are not available the day before.
If the response is good, we will set up two classes per week.
For early birds, we have activated online booking in our app, which you can download.

Free Special soon: We are very happy to announce that we will have Josè H. Robles for an advanced Yoga live lesson with us soon!

He is a professional teacher with more than a decade of experience.

He is a Teacher of Hatha Yoga, AeroYoga®, Vinyasa Yoga Student and assistant for Ashtanga Yoga Mysore style Professor of acrobatics in aerial techniques. 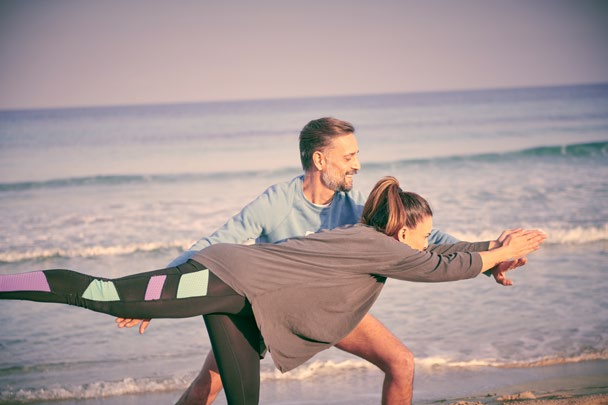 This will be a virtual but live class. Everybody who is interested will be welcome to join this special, depending on availability of free spots. If you are interested in this awesome experience let us know soon and we keep you updated. E-mail us: bnsoul@jayb-s.com, Subject: Jose Yoga

The parking lot right in front of the Civic Centre provides space for hundreds of vehicles.